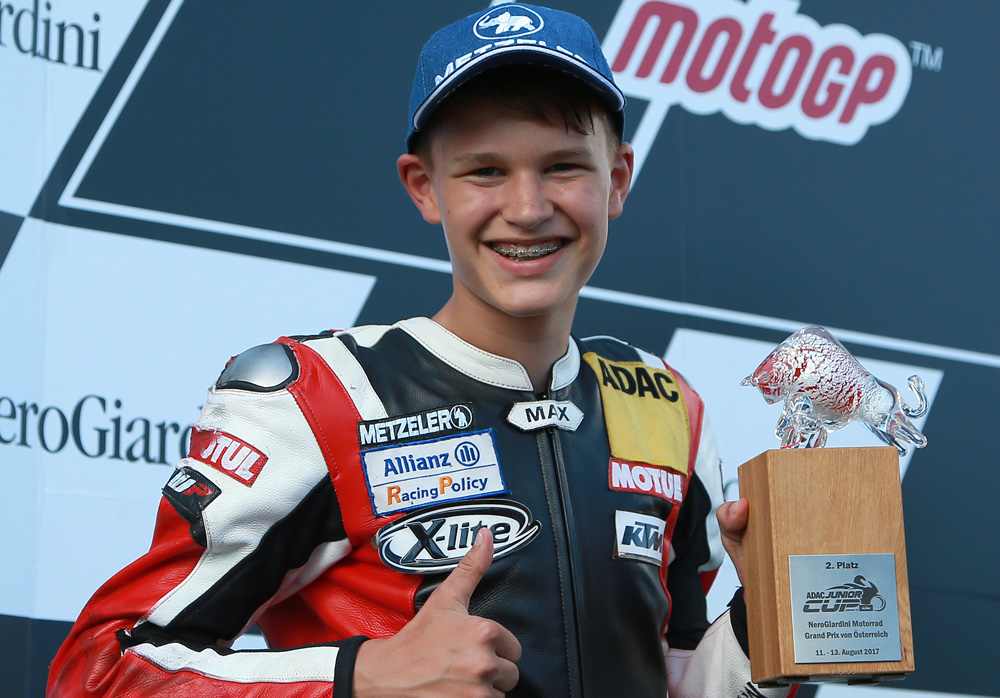 Rapid rookie Max Schmidt only joined the ADAC Junior Cup this year but now leads the championship after a dramatic last to first race. He’s our Rider of the Week

Last week we had a hard time choosing which of our incredible riders to showcase as Rider of the Week.  With four countries taking to the track and so many stories within each series, we decided French Championship leader Clement Barbier deserved to feature. This week we wanted to share with you the formidable talent of Max Schmidt, championship leader for the ADAC Junior Cup powered by KTM in Germany. His racing at Sachsenring (July 1-2) was sublime and highlighted, what we believe, all KTM RC Cup riders need to win races. Persistence in the face of adversity.

At just three years old, in his Grandpa’s garden, Max Schmidt started riding on a PW 50.  He soon discovered he had a passion and raw talent, so pushed forward to gain experience on the dirt, riding KTM SX50, SX65 and then the SX85.  From 2015 he started riding the NSF 100.

It was Max’s Father, Oli, who helped him transition through the bigger bikes. Oli races motorbikes but was keen not to push his son. He enjoyed watching Max having fun on the little Yamaha but quickly noticed he had some talent. Oli decided to buy Max a faster bike and encourage him to get as much training in as possible, in case he did want to be a racer.

Before choosing the ADAC Junior Cup, Max was riding in the ADAC mini bike cup. In 2015 he finished P11, and in 2016 he finished P5 on the Honda NSF 100. This year also brought him an incredible win at Sachsenring. It was a wet race and Max crashed in the second corner. This placed him last. However, as he was to show again this year, Max didn’t give up. He got his head down and pushed his way to the top step. A remarkable display of his talent and determination. In both of these seasons, he was injured so also missed 3 or 4 races.

From the first time Max saw the KTM RC 390 on track he knew he wanted to ride the series. It was Assen 2014 when he first started discussing it with his dad. Oli liked the series as it was well organised and he also liked that the RC 390 Cup bike was small enough to ride on the karting track. This meant Oli was able to give him better training due to the advantage of riding on the smaller tracks.

We asked Max what he thought of the RC 390 Cup machine when he first rode it and how his season felt before Sachsenring.

Max goal for the season is to finish a top 10 rider, possibly top 5. Which again highlights his maturity towards his racing career. Focussing on his targets and giving complete dedication to achieving that.

His first win this season came at Sachsenring. He stalled on the line and started last.  Again, instead of allowing his emotions to take hold of him, he restarted the bike, got his head down and pushed hard. In his first lap, he passed 20 riders.

“I had a good reaction but the engine stopped, so I was in the back of the field (last) entering the first corner. I was annoyed and decided to push as hard as I can; luckily I was able to overtake rider by rider and was 13th after lap 1; second lap was also as good as before, at the end I was in 10th position and I could see the top riders in front of me and I recognized I could go much faster than them; third lap on 5th. At the end of lap four I was at 2nd position, and I still pushed to break clear from the others.

“After a few laps I looked back and saw the wild card rider from Greece behind me, he was the only one who was able to follow me. We touched each other twice. He was strong on the brakes, and he overtook me once but I saw that I could go much faster in the corners, I won’t let him win even if I knew he would not get points for the championship. In the last lap I overtook him in the Omega and defended my position to the finish line – I was so incredibly happy to see the chequered flag as winner.”

Max took adversity, and he fought his way through to take one of the season’s most exciting races. This places Max on the top spot in the championship.  A position he says he will defend with everything he has.

The bond between Oli and Max is undoubtedly strong. Max says his biggest inspiration is his Father, but his idol is Valentino Rossi.  Max might be fortunate to have had a Dad he is inspired by share all his knowledge, but even the best-trained riders don’t always take wins. We admire Max’s application of his training, his undeniable talent on a bike and his ability to charge through misfortune and never give in.

We end our interview by asking Max what he likes most about the ADAC Junior Cup powered by KTM.

“Taking part in the MotoGP paddock with my hero´s; the trainer – the fact that they will help us to develop our performance and very important, it is like a family, we are competing on the track, but we are friends at the paddock.”

The whole team at KTM RC Cup think Max is going to be a star of the future and we look forward to seeing him race against his father one day! 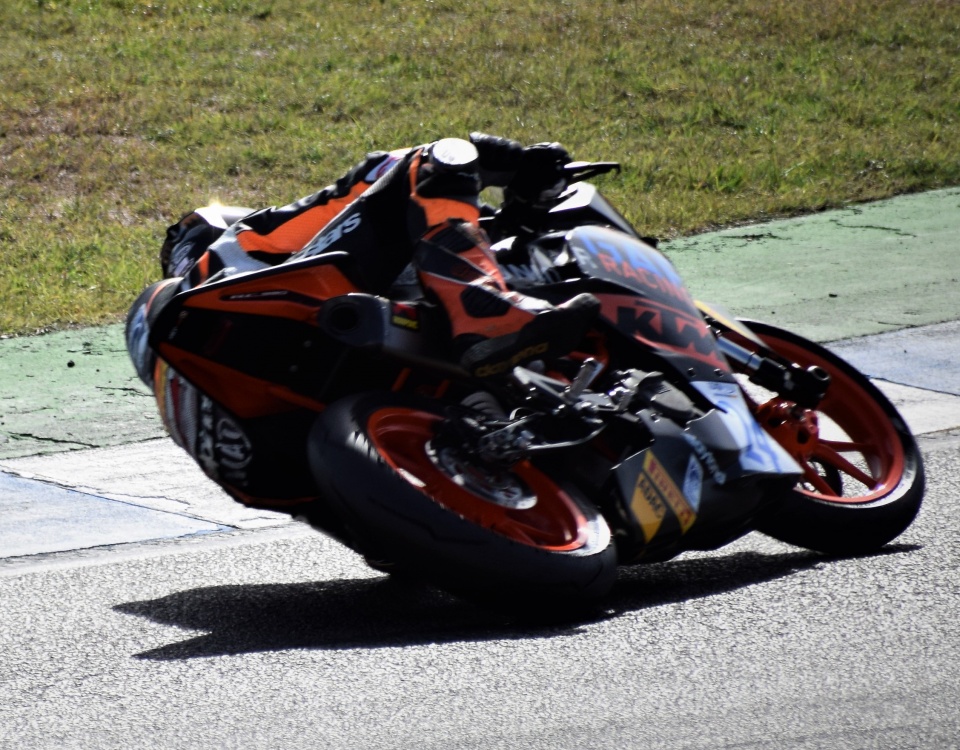 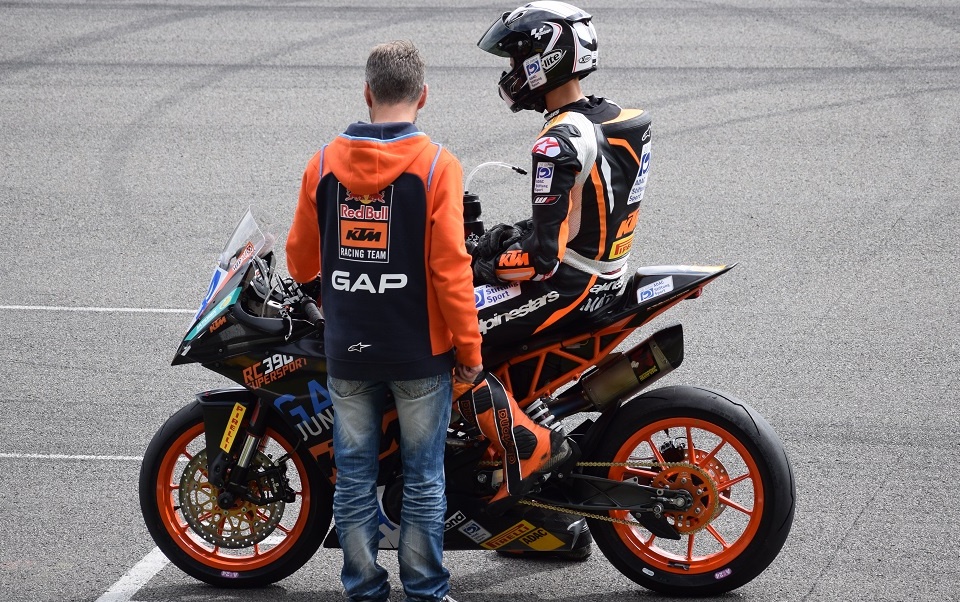 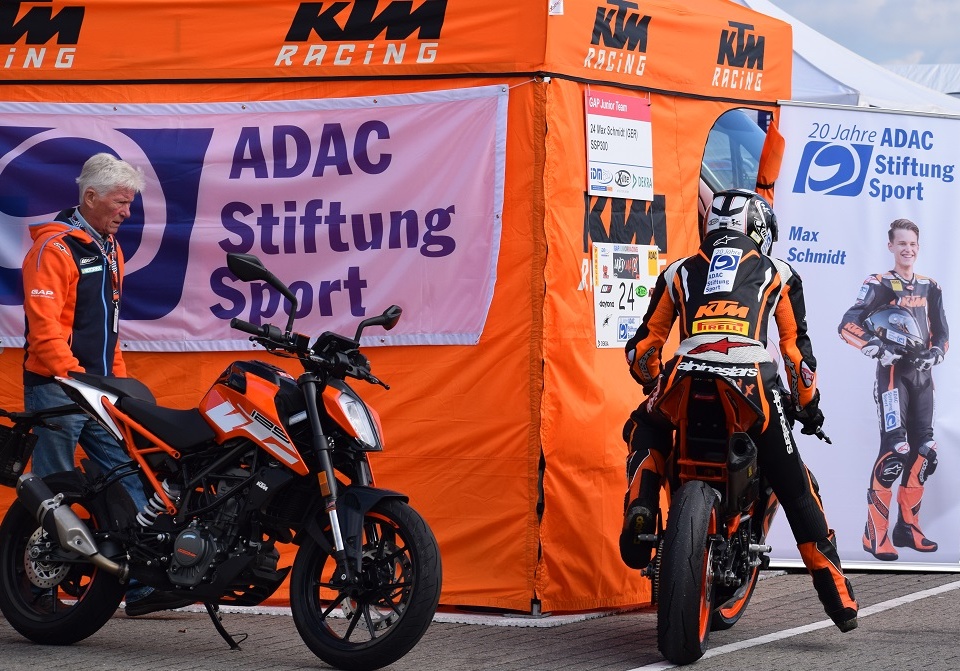